Bagan in the central Myanmar is the capital of the Kingdom of Pagan from the 9th to 13th centuries, the first kingdom to unify the regions which would later become the present-day Myanmar. More than 10,000 temples and pagodas were built during the kingdom’s height from the 11th to the 13th centuries, but only around 2,000 remain today.

Considered as a sight to rival the Angkor Wat in Cambodia or Machu Picchu in Peru, Bagan stands out for not only the great number of religious structures, but also their magnificent architectures that had influences on the Burmese temple design later.

The Bagan Archaeological Zone is a main tourist draw in the country. It consists of the Old Bagan in the center, Nyaung U town – the area’s main transport hub in the north and New Bagan in the south.

Bagan experiences almost no rainy season in spite of its location in the lower part of Myanmar. Visitors can come and discover the ancient city any time of the year. Though, the best time to visit is from October to February when the temperature is more moderate. From March to May, Bagan often see temperatures in excess of 40°C.

Bagan is reachable by air, rail, bus, car, and river boat. The Nyaung U Airport is the gateway to the region. From the airport, it takes a 20 minute drive to the center. Domestic flights from Yangon take about 80 minutes, from Mandalay is 30 minutes and from Heho is 40 minutes.

Myanmar Railways operates a daily overnight train each way between Yangon and Bagan, travel time is at 18 hours. Between Bagan and Mandaylay, there are two daily trains each way which takes about 8 hours.

From Yangon and Mandalay there are overnight buses and cars to the region. Visitors can also travel by boat following the Irrawaddy River. Boats departure from Mandalay is approximately 9 hours for 170km.

One of the four surviving temples in Bagan, it was built in 1105 AD then was damaged in the 1975 earthquake. The present-day temple was fully restored and well-maintained by frequent painting and whitewashing of the walls. Its design is an outstanding blend of Mon architecture and Indian style in the layout of a cruciform with terraces lead to a small pagoda at the top covered by an umbrella known as hti. Ananda temple houses four standing Buddhas which face four directions of East, West, North and South. 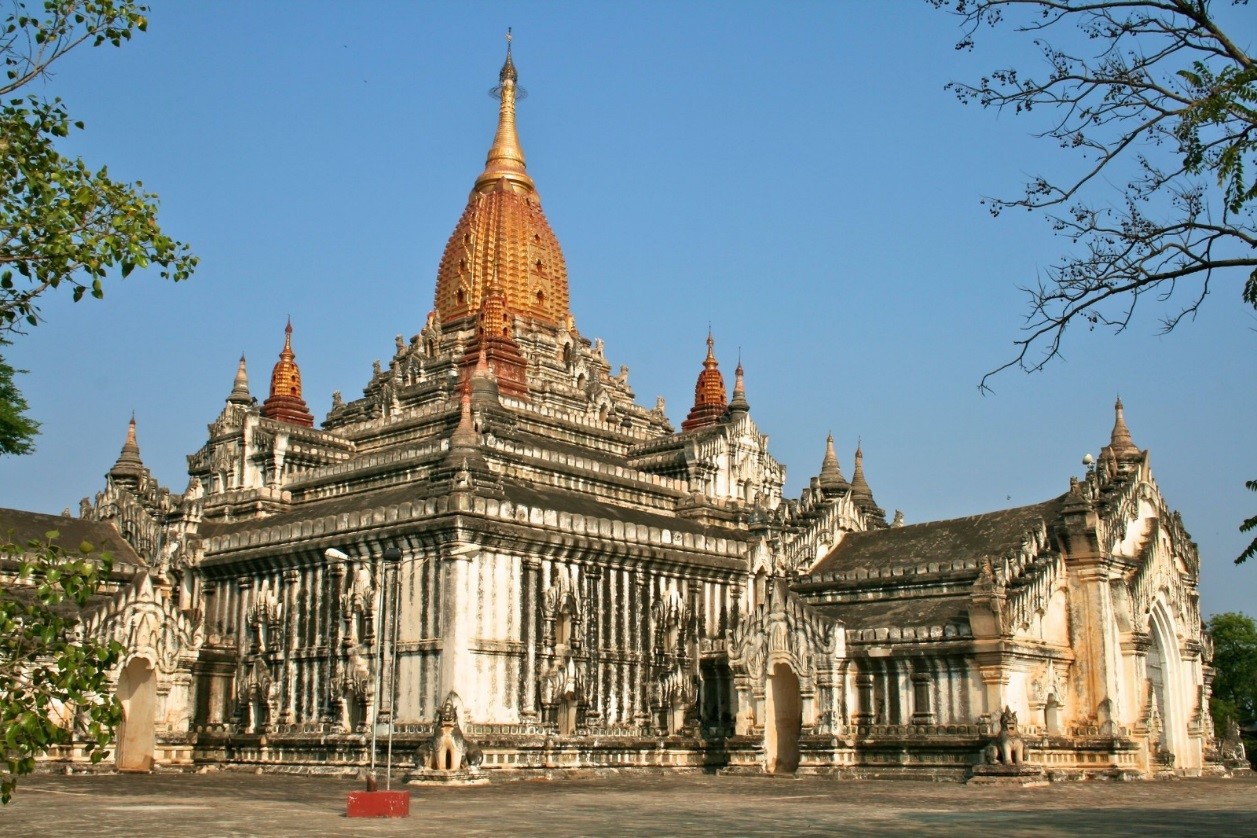 The largest of all temples in Bagan, Dhammayangyi was built in an architectural plan similar to Ananda temple. However, it was never completed because the King Narathu who set up the construction was assassinated. Today, the temple’s interior is bricked up, only four porches and outer corridors are accessible. 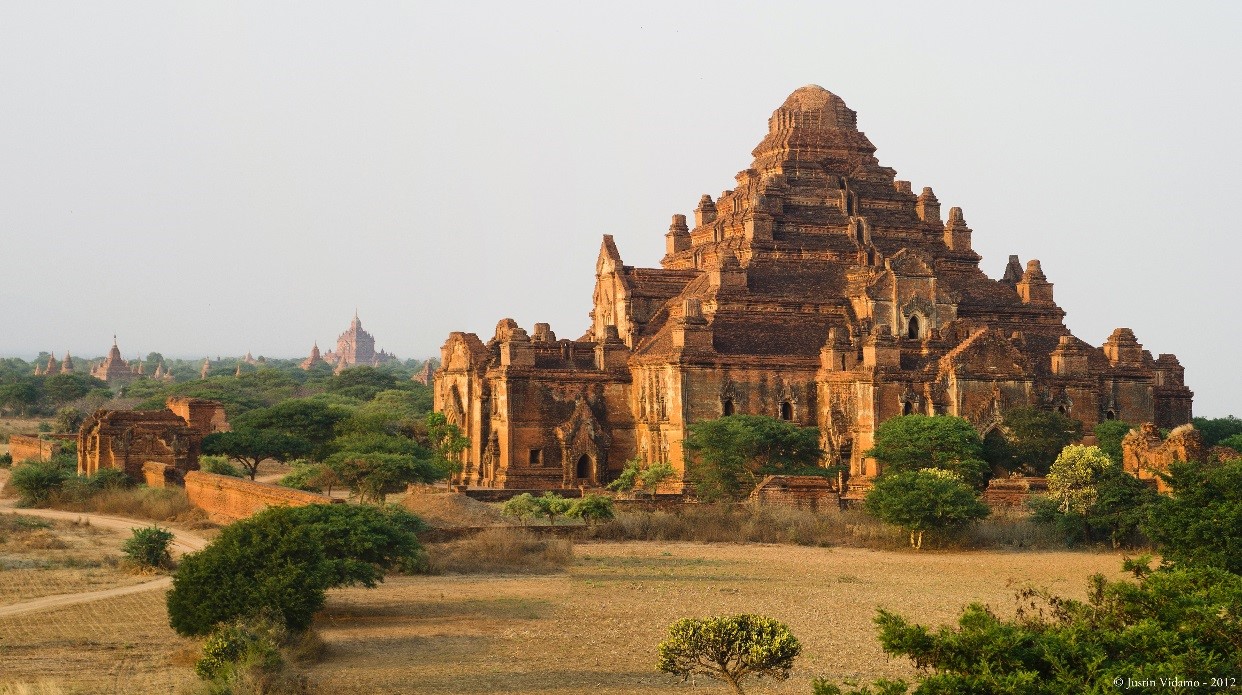 Located in Nyaung-U, it is a prototype of Burmese stupas, consists of a circular gold leaf-gilded stupa surrounded by smaller temples and shrines. The construction of the Shwezigon Pagoda began in 1089 by King Anawrahta and was completed in 1102 AD by King Kyansitth. The pagoda is believed to enshrine a bone and tooth of Buddha. Within the compound is a stone pillar containing Mon language inscriptions dedicated to King Kyansittha. Pilgrims in the country travel to Shwezigon every year to join the great festival during the Burmese month of Nadaw, which falls into November or December. 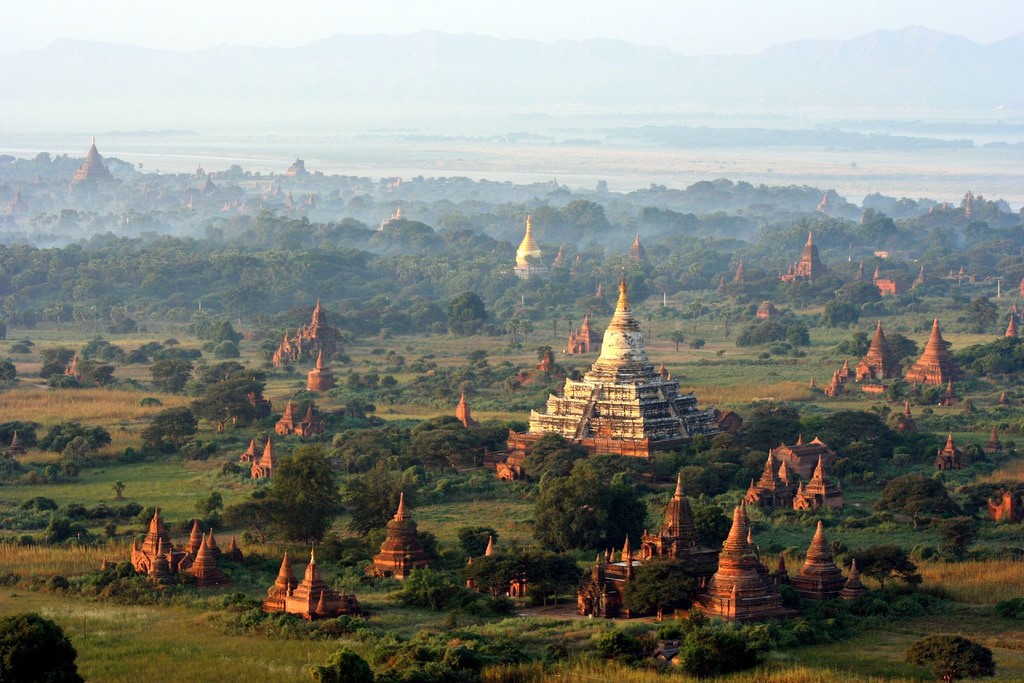 Constructed by King Anawrahta in 1057, the stupa enshrines sacred hairs of Buddha. It contains five terraces topped with a cylindrical stupa, which has a bejeweled umbrella. Shwesandaw pagoda is known as a famous sunset-viewing spot in Bagan.

Located in the Minnanthu village west of Bagan, Sulamini, literally meaning ‘crowning jewel’, was built in 1183 by King Narapatisithu. The temple features two storeys on broad terraces assembling a pyramid. Sulamani Temple was restored after being destroyed in the 1975 earthquake, and utilizes brick and stone, with frescoes in the interior of the temple. 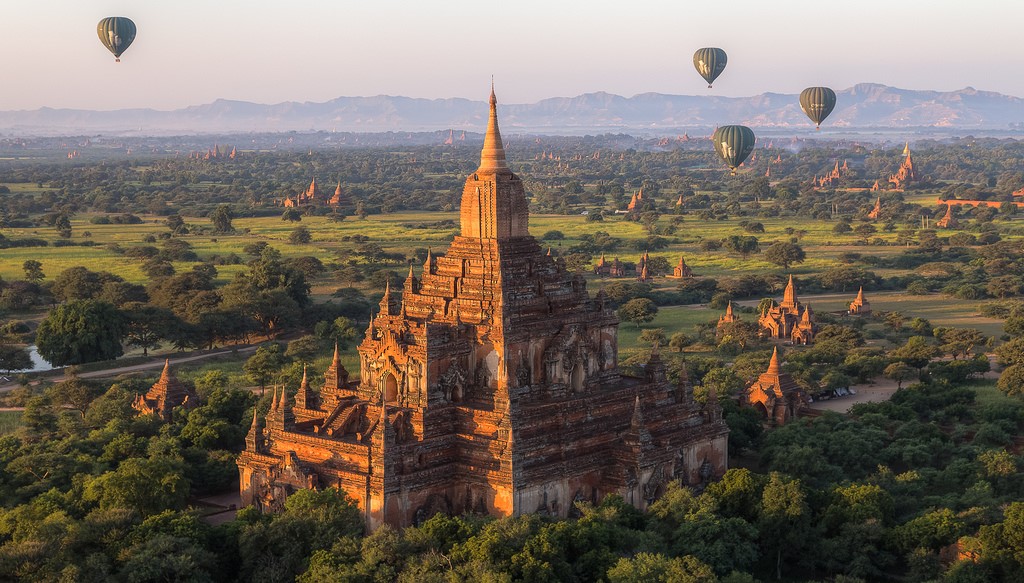 Htilominlo Temple was named after its founder, King Htilominlo who ruled from 1211 to 1231. The temple was made of red brick with three stories. It is known for the elaborate plaster moldings. Htilominlo temple was destroyed in the 1975 earthquake then was restored after that. 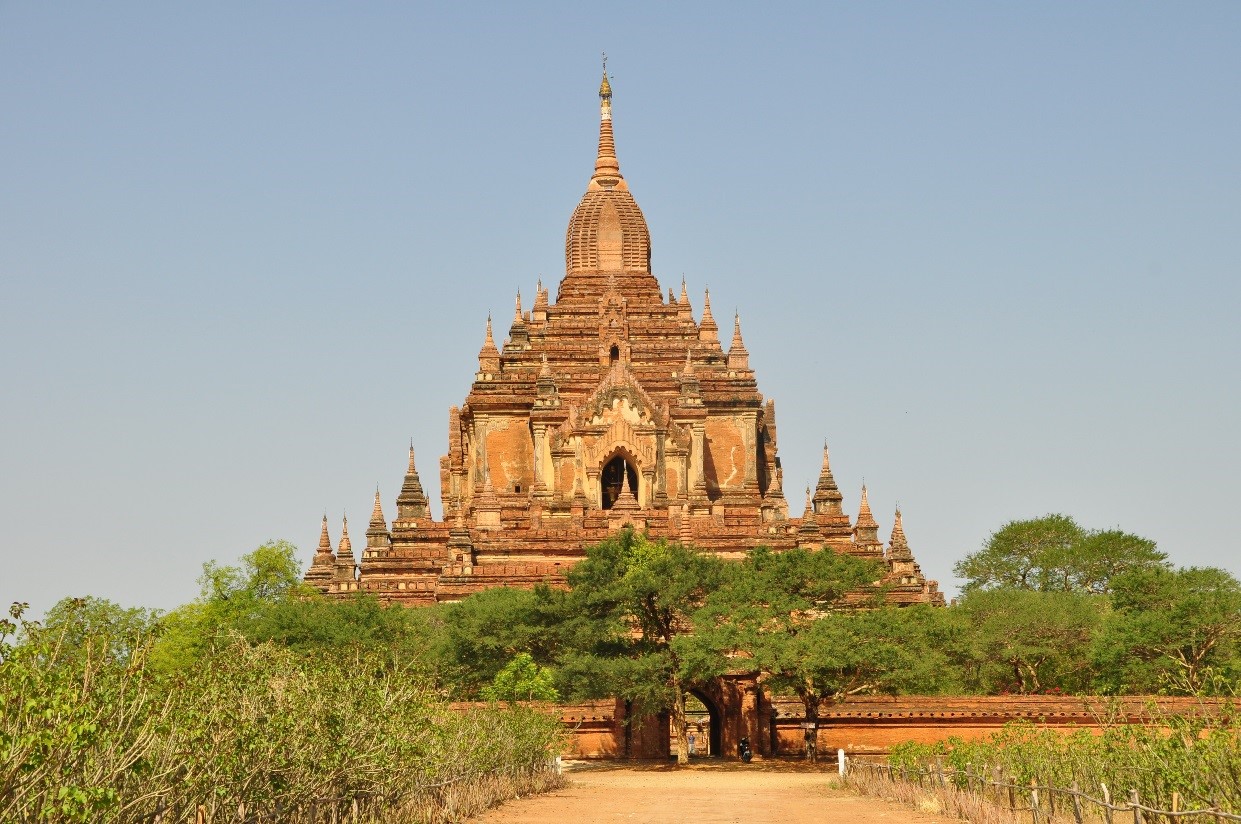 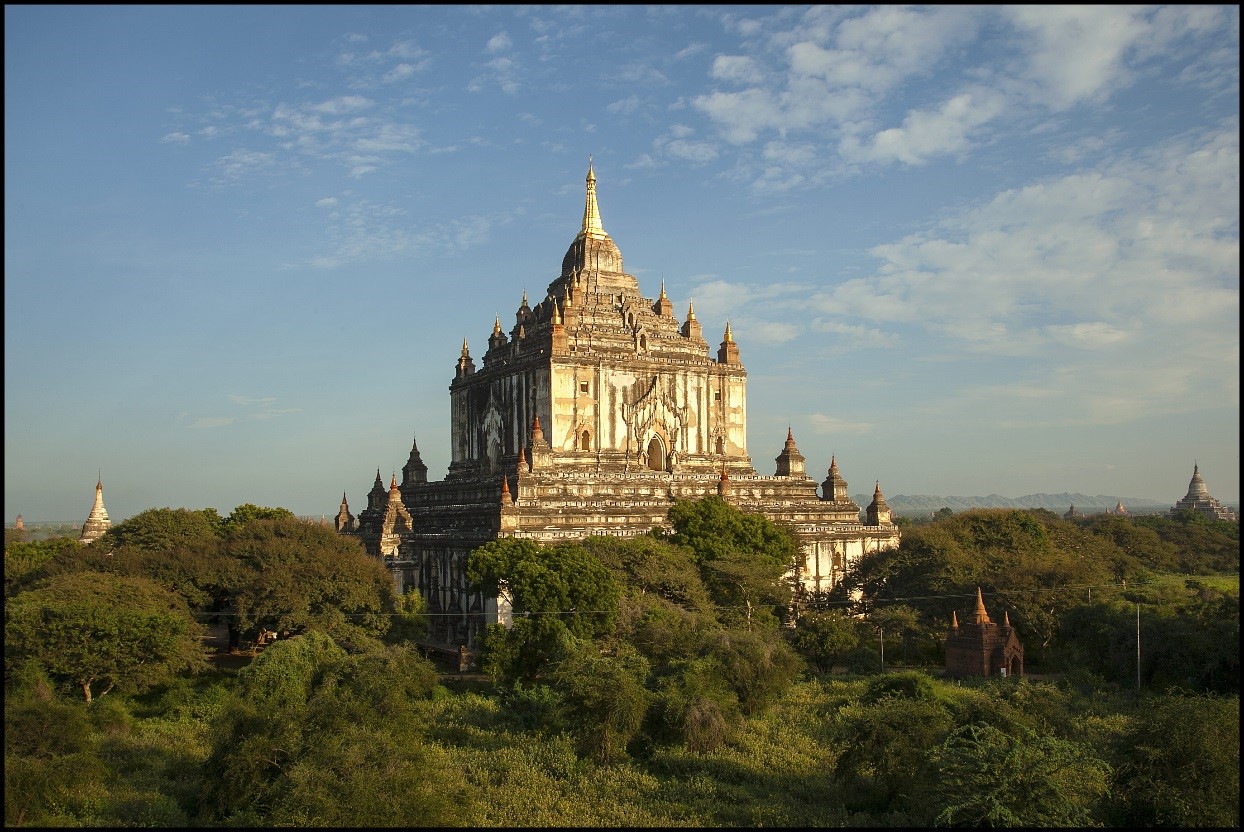 The temple was built in the mid-12th century by King Alaungsithu. Located next to the Ananda Temple, it has two storeys with the seated Buddha image on the second storey. With the height of over 60m, this is one of the highest temples in Bagan.

Bupaya Pagoda is located at a bend on the right bank of the Ayeyarwady River. The small pagoda, which has a bulbous shaped dome, was built by the third King of Pagan, Pyusawhti who ruled from 168 to 243 AD. It is one of the most notable shrines among thousand pagodas in Bagan. The original pagoda was completely destroyed in the 1975 earthquake. It was fully reconstructed using modern materials, with lesser adherence to the original design. Subsequently it was built as a gilded superstructure. 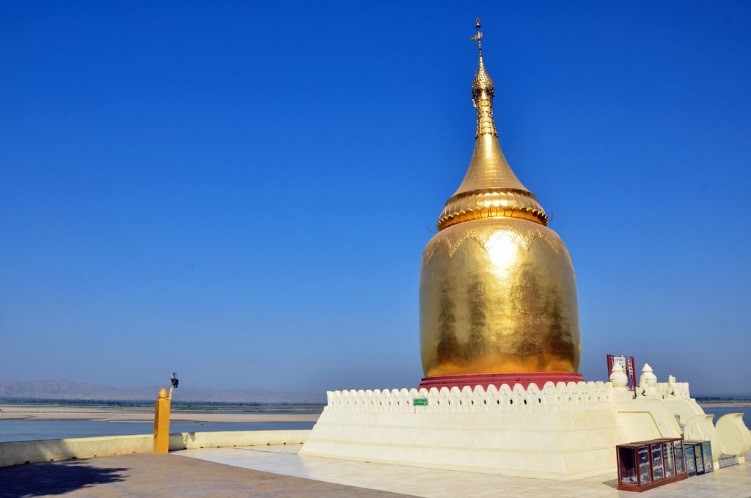 Mount Popa is an extinct volcano located about 50km southeast of Bagan. On the top of the mountain is numerous Nat temples and relic sites, make it become a pilgrimage site for many Burmese pilgrims. On the southwest of the mountain is Taung Kalat (pedestal hill), there is a Buddhist monastery located at the summit. From here you can enjoy a panoramic view of the surrounding and the ancient city of Bagan. 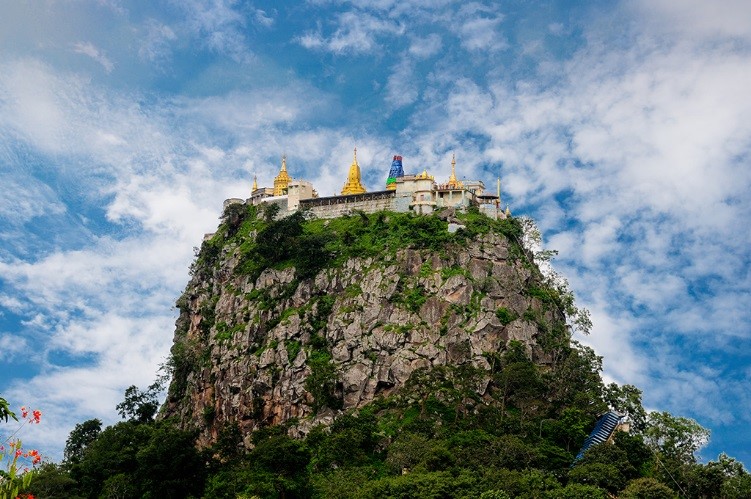 Flying above Bagan in hot-air balloon at sunrise or sunset will be an unforgettable memory. You will be amazed at the breathtaking scenery of temple after temple in their hundreds appearing through the mist and the lazy Irrawaddy River in the distance. The trip takes about an hour. 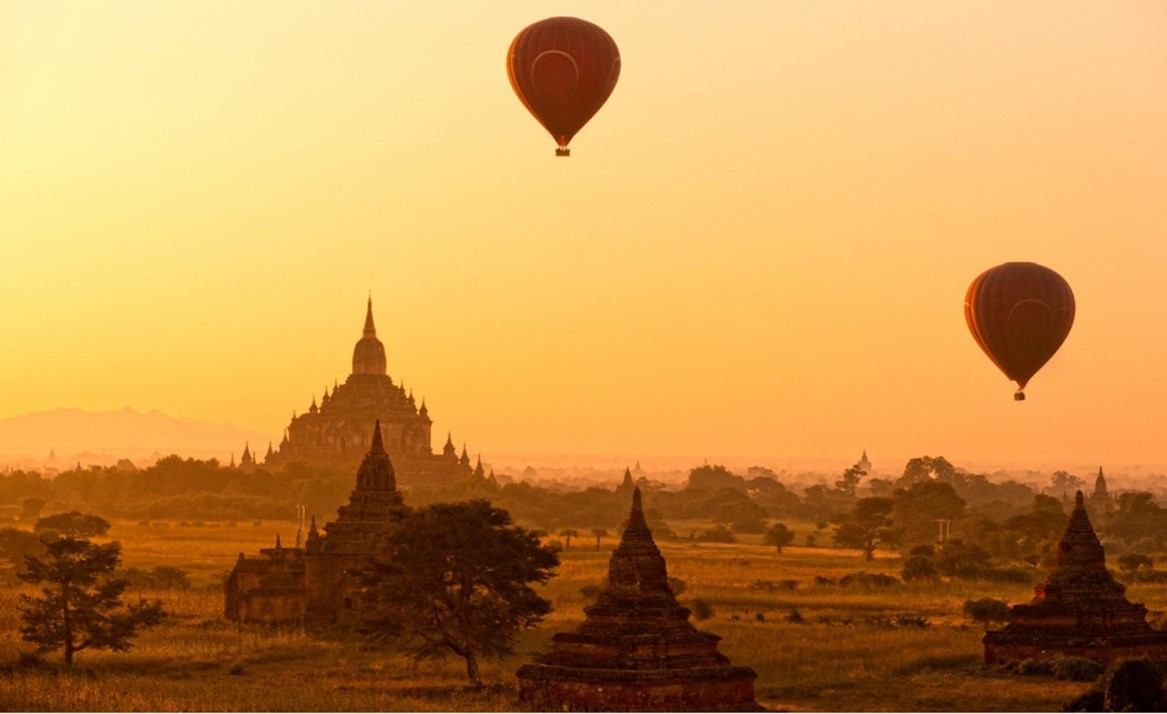 There are many ways to explore Bagan, by horse cart, minivans, or hot air balloon. But if you are a true adventure lovers, then biking is the best. The plain in Bagan is quite flat with only several uphill areas. Not only you get the opportunity to make your trip more exciting, but you can get up close and personal in hidden corners that other ways cannot offer. 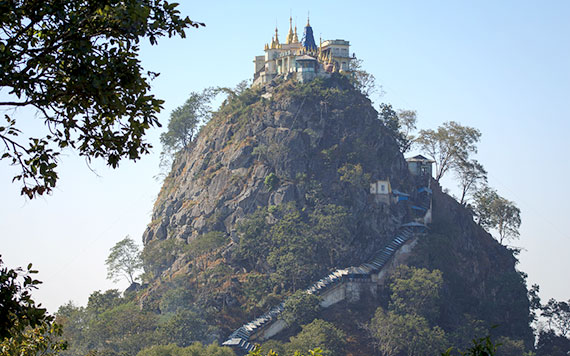 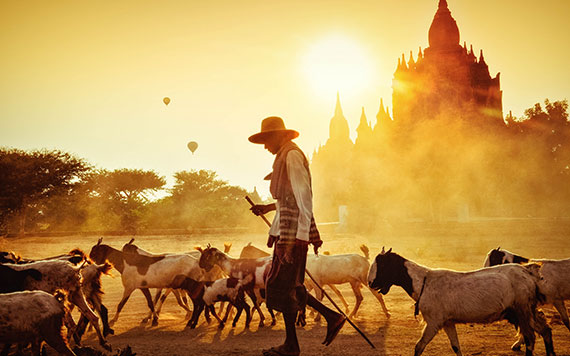 1
Days Bagan – Full Day City Tour
Type: Historical & Cultural | From: $62 pp
Start with the busy local market at Nyaung Oo, and then continue to the golden...
Simply express your tour needs, we'll customize a trip plan for you. No deposit is required
until you are totally satisfied with the trip plan.
Free call +84 - 24 - 3835 4899
Create your trip now
Privacy Policy | © 2015 365Travel.asia. All rights reserved
Member of