Bangkok is a city of contrasts, old-world charm and modern life, in chaos but always with friendly smiles. With a population of more than 11 million, towering skyscrapers, heavy traffic, intense heat, and vibrant life both day and night, Bangkok may not immediately give tourists its best impression. But it’s one of Asia’s most cosmopolitan cities with something for everyone. Marvel at the shining temples, wonder around the bustling Chinatown, take a long tail boat on the floating markets, see Buddhist monks filling the streets or just hang out to taste its delicious street food, just to name a few.

The history of Bangkok can be traced to the 15th century when it was a small trading village on the banks of the Chao Phraya River. Bangkok was founded as the capital of Siam (Thailand today) by King Rama 1, the first monarch of the current Chakri dynasty, in 1782. Since then, it has served as the political, economic, cultural and spiritual capital of Thailand.

Bangkok enjoy three seasons of hot, rainy and cool. The monsoon season starts around mid-May until October, with September being the wettest month of an average rainfall of over 300mm. the dry and cool season lasts from November to February. And the hot one fills the rest time and sees occasional summer storms. In general, the weather of the city is hot year-round, ranging from 22 to 35°C. Best time to visit Bangkok is from late November to January, which is the city’s coolest time. The least ideal time is between March and May as it is the hottest time with highest recorded temperature was 40°C.

Bangkok is connected to the rest of the country through the national highway and rail networks, as well as by domestic flights to and from the city's two international airports.

Bangkok is one of the busiest air transport hubs in Asia. The city is served by two airports, Don Muang and Suvarnabhumi. The Suvarnabhumi International Airport, which is 30km east of the city serves more than 40 million passengers every year. There are many domestic and international airlines have flights to here from most major cities in Asia, Europe, America and Australia. The former airport of Don Muang, located 20km north of Bangkok now serves as a minor domestic airport and airstrip for charter flights to and from the capital.

Travelers can get in to Bangkok by bus from other neighboring countries. The city has three bus terminals, namely Northern, Eastern and Southern, which also have buses to other regions within the country.

Most trains to Bangkok come through the Hua Lamphong Railway Station, the main terminal of the national rail network located close to Yaowarat. In addition to long-haul routes, this railway also has daily trains running from and to the outskirts of the city.

Bangkok currently has three rapid transit systems of the BTS Skytrain, the underground MRT and the elevated Airport Rail Link. 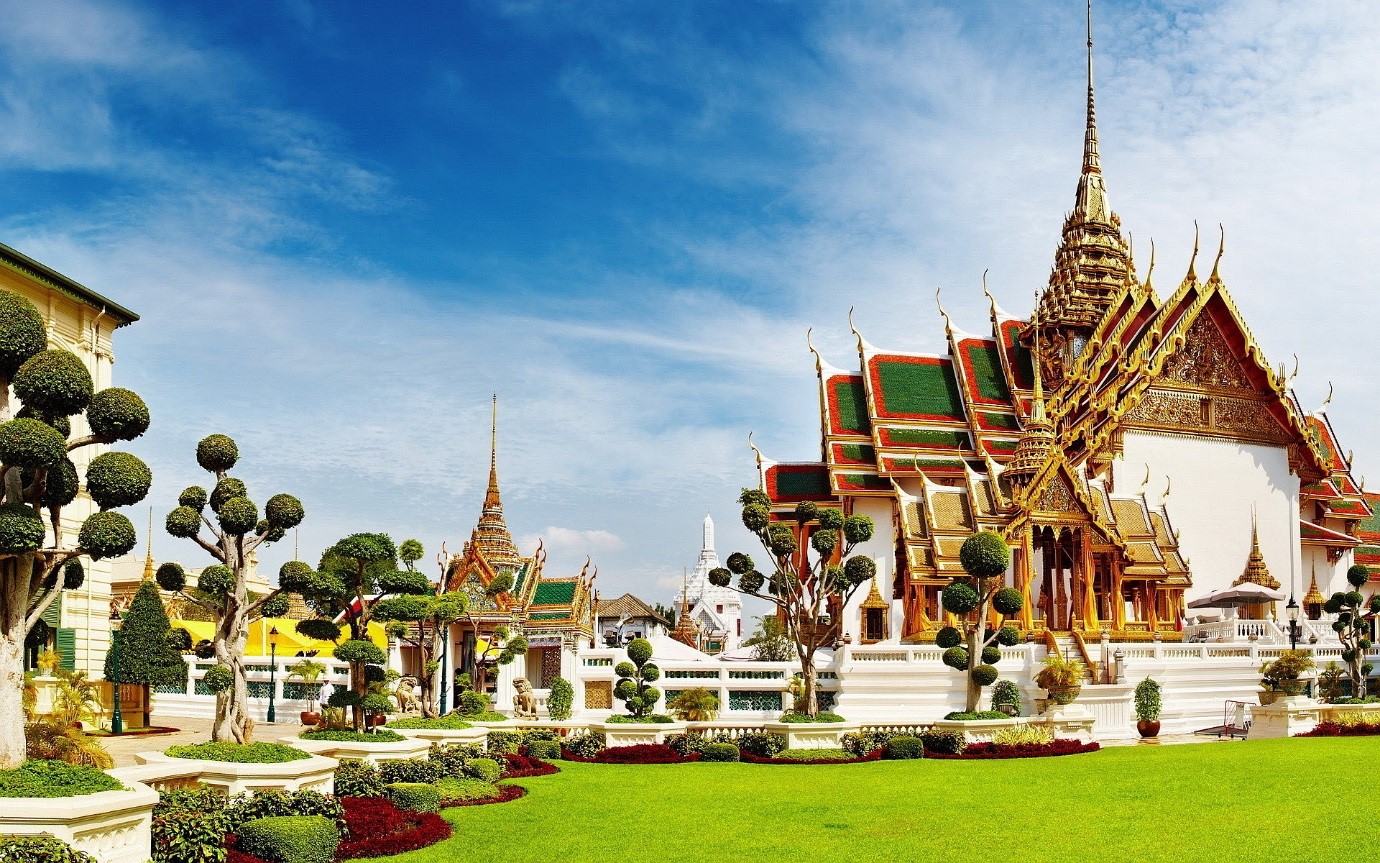 One of the must-sees in Bangkok and perhaps the most famous site, the Grand Palace is a complex of building at the center of the city.  Built in 1782, it has been the official residence of the Thai King, the royal court and government for almost 150 years until 1925. It is now served as a museum and for ceremonial purposes only. Cover an area of 218,000 sq. m, the complex is divided into three main areas: the Outer Court with many public buildings, the Temple of Emerald Buddha and home to royal offices; the Middle Court including the most important residential and state buildings; and the Inner Court is exclusive for the King and his Royal Family.

Wat Phra Kaew is the most sacred Buddhist temple in Thailand. Located within the grounds of the Grand Palace, it houses the Emerald Buddha which is considered as the potent religious-political symbol and the palladium of the Thai people. The Buddha image is a dark green statue in meditating position carved from a single jade stone. 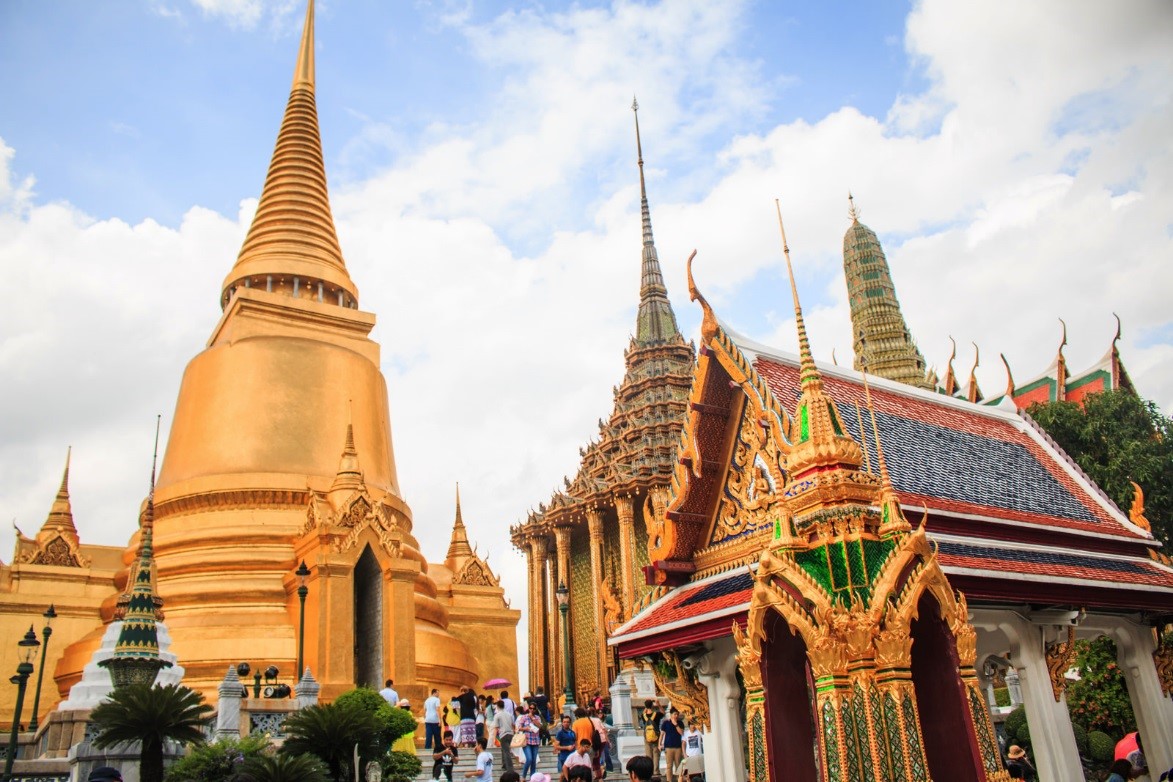 Wat Pho (the Temple of the Reclining Buddha)

Located behind Wat Phra Kaew, Wat Pho is a temple complex housing the largest collection of more than one thousand Buddha images in Thailand, including the giant famous reclining Buddha of 46m long covered in gold leaf. It is also known as the birthplace of traditional Thai massage which is now still taught and practiced at the temple. 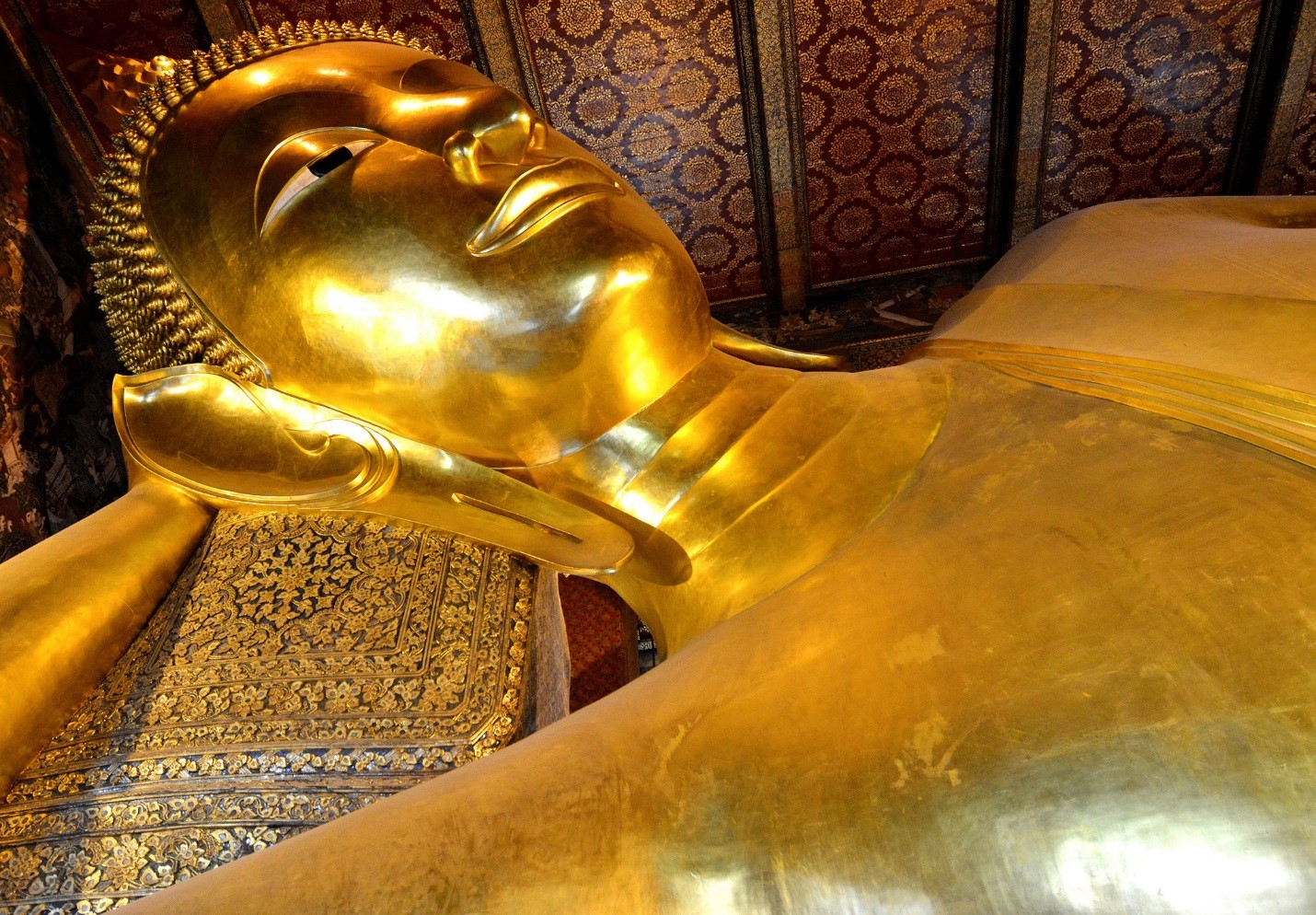 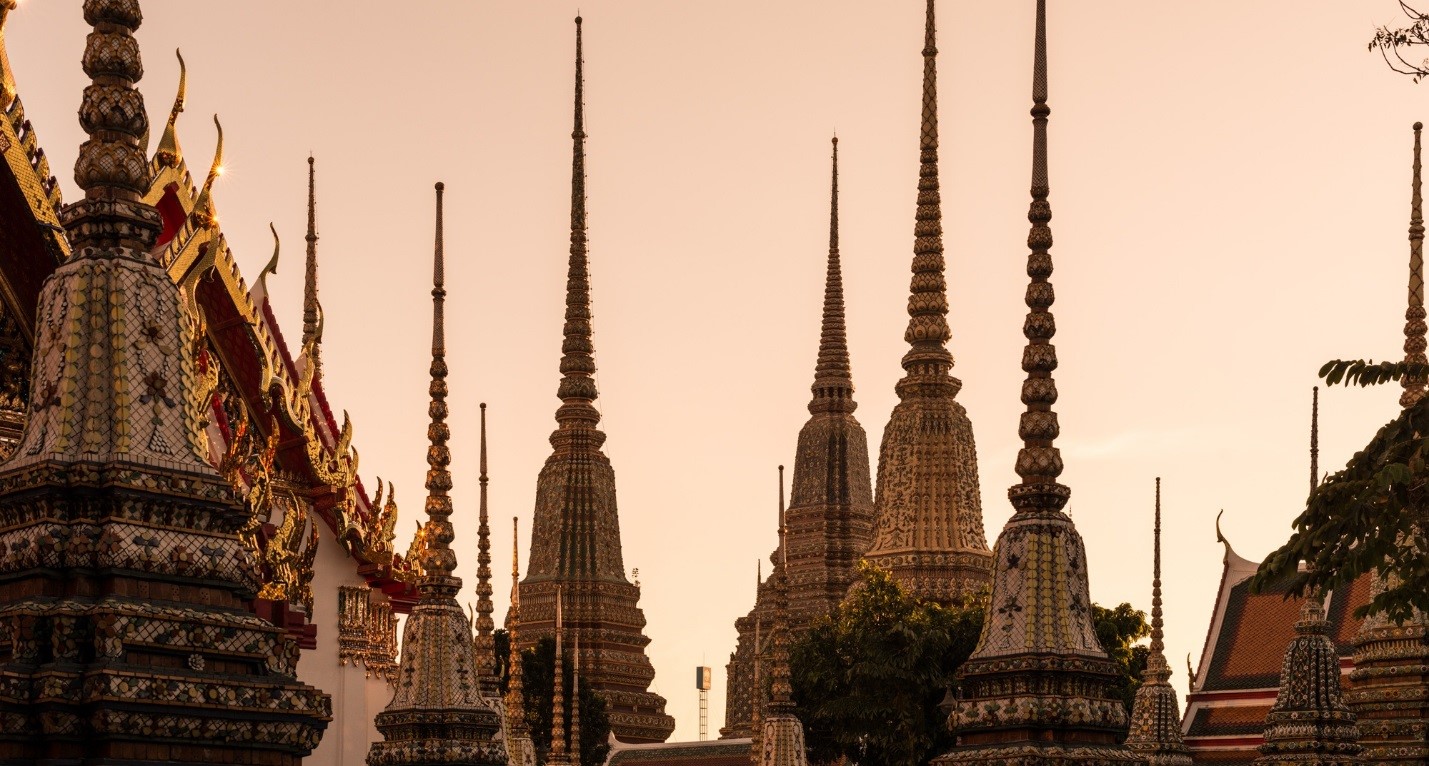 Also known as Marble Temple, Wat Benchamabophit is one of the most beautiful temples in the capital. Its structure is a perfect example of Bangkok’s architectural style of high gables, stepped-out roofs and elaborate finials. The temple is made of white marble imported from Italy and the golden decorated windows, giving it a delightful appearance, especially in the sunlight.

Wat Suthat is one of the oldest temples in Bangkok. It was built in 1807 during the first three reigns of the Chakri Dynasty and took 40 years to complete. The temple features an architecture with sweeping roof, magnificent wall murals and exquisite hand-carved teakwood door panels. Wat Suthat contains the Buddha image of Phra Sri Sakyamuni. 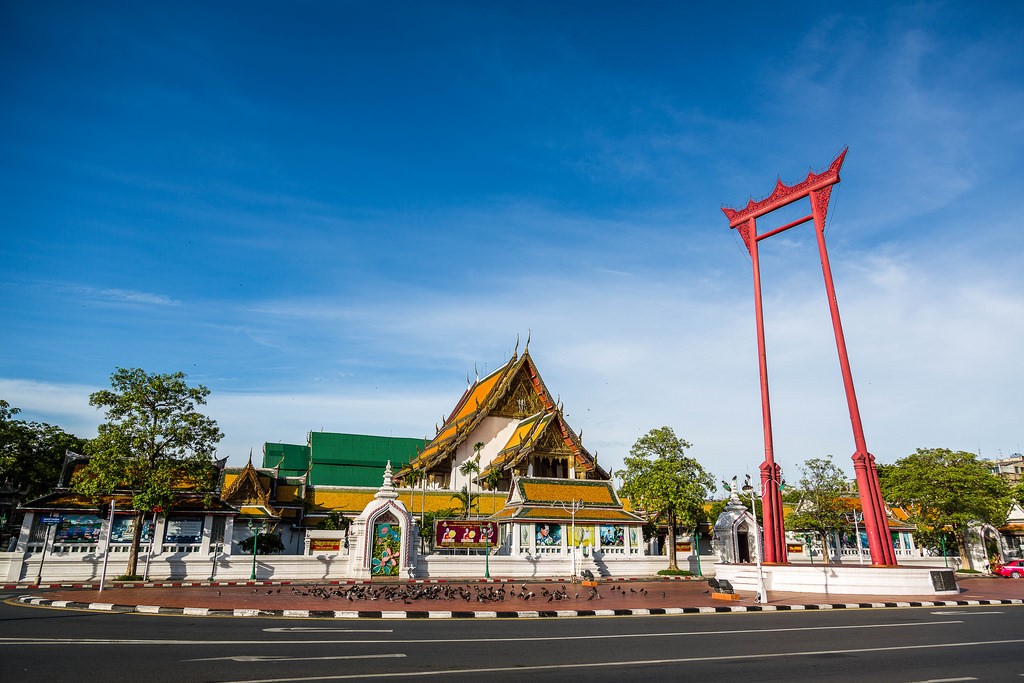 The Giant Swing is a religious structure formerly used in an old Brahmin ceremony. Located in front of Wat Suthat in Phra Nakhon, it is 21.15m tall and includes two towering red pillars and intricate carved crossbar which is visible from afar.

Wat Arun (the Temple of Dawn)

Khmer-style Buddhist temple standing majestically on the banks of the Chao Phraya River. Its main feature is the central prang (spires) covered with porcelain and symbolizes Mount Meru. Despite its name’s meaning (temple of dawn), the best views of the temple come at sunset. 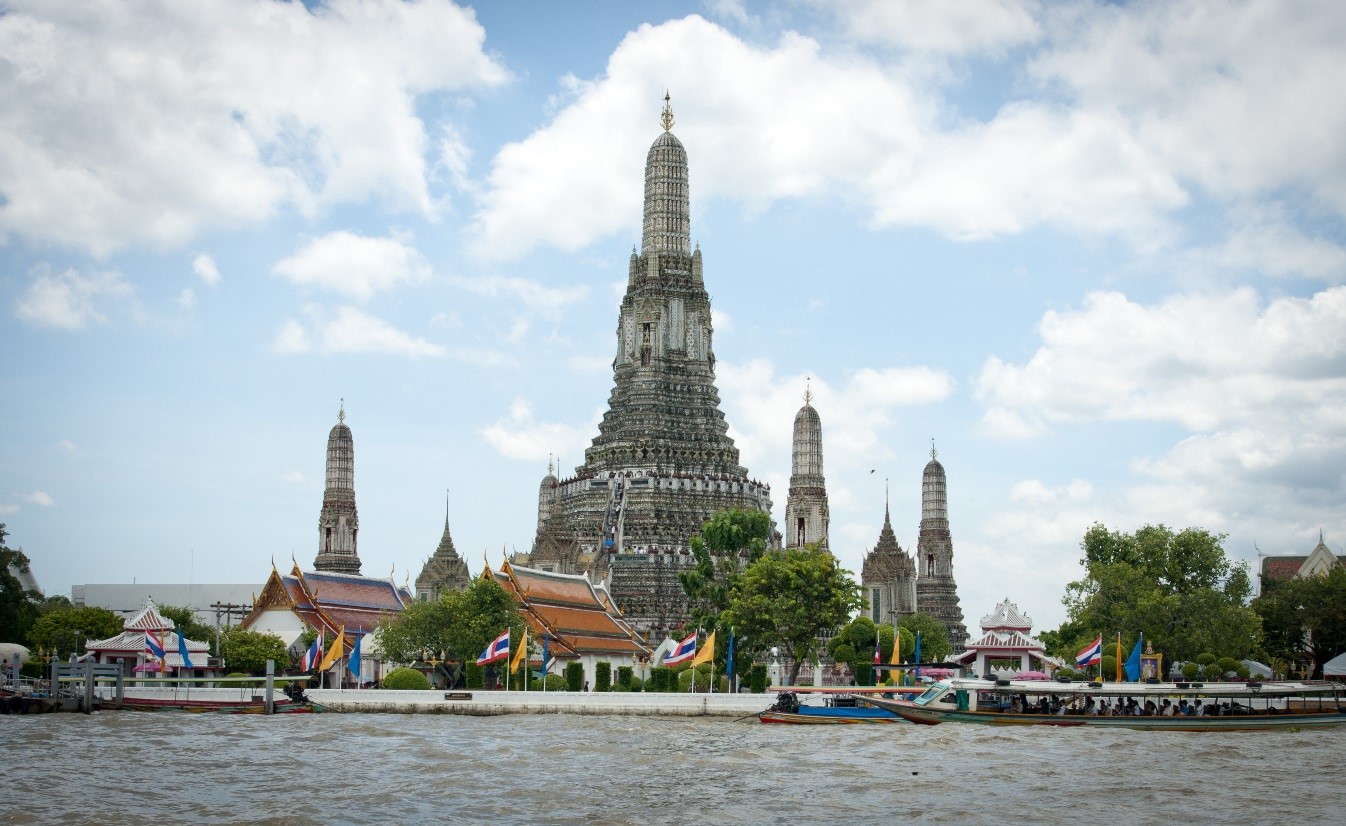 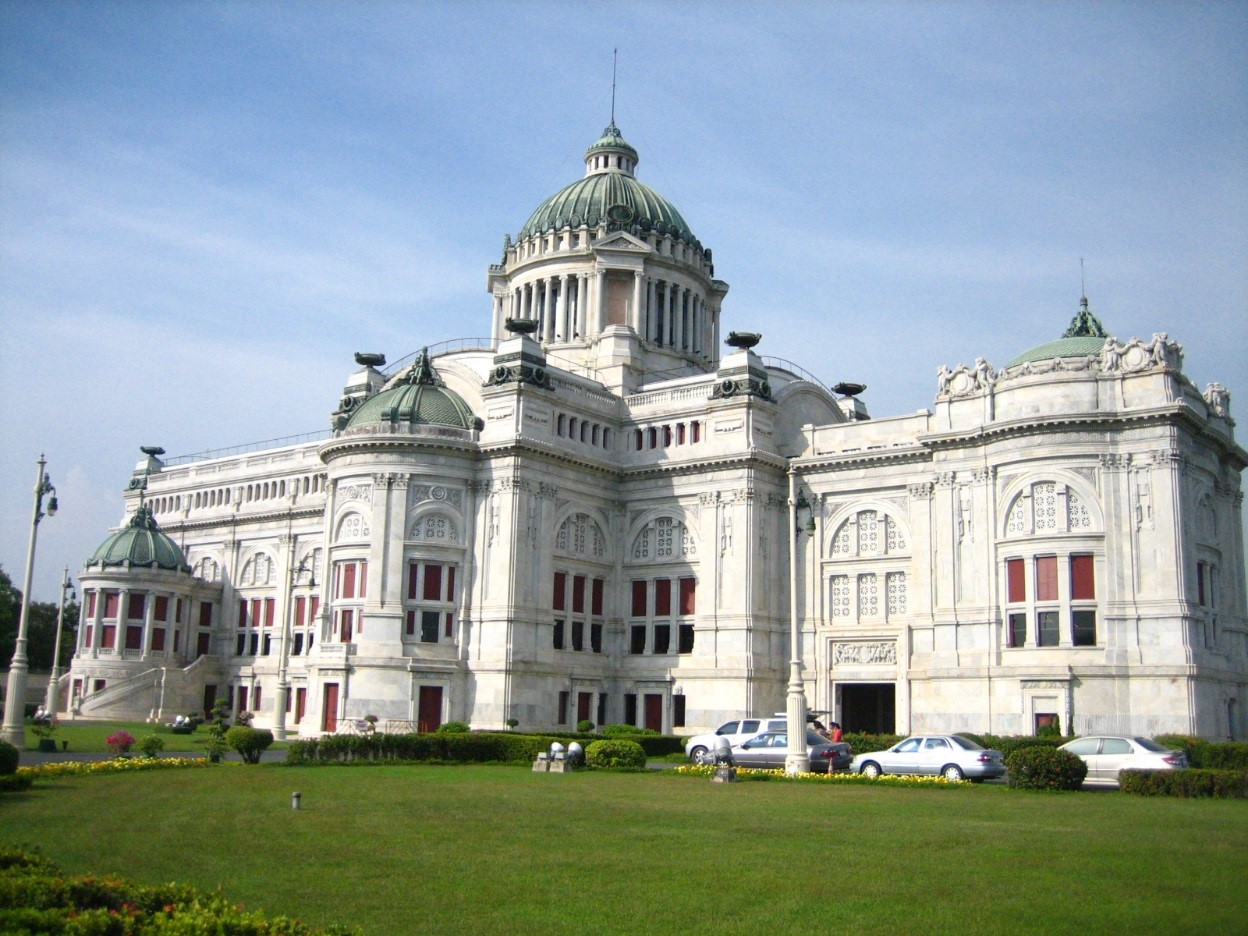 The two-storey white marble hall is located within Dusit Palace. Built in 1907 by King Rama V and completed by King Rama VI in 1915, it features a neo-classical Renaissance architecture with a central dome surrounded by six smaller domes. It is now served as a museum representing the history of the Chakri Dynasty from the first to the sixth reigns.

Khao San Road is located in the Banglamphu area, 1 kilometer north of the Grand Palace and Wat Phra Kaew. This is considered as the center for backpackers with numerous cheap accommodation. Only about 1km long, the street is lined up with hundreds shops selling handicraft, paintings, clothes, souvenirs to travel services. At night, it turns into an entertaining center for travelers with bars, music, dancing, partying. 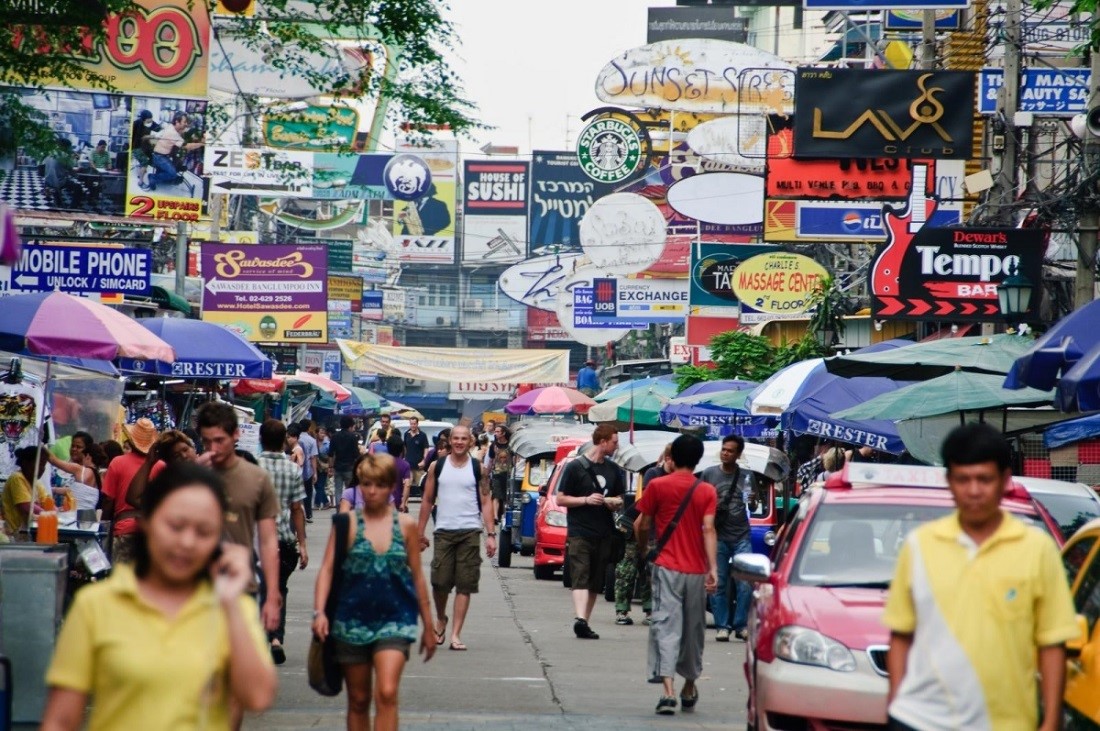 Bangkok’s vibrant Chinatown covers a large area around Yaowarat and Charoen Krung Roads. It is known for its variety of foodstuffs, at night it becomes a large food street attracts tourist and local from everywhere. There are many shops selling everything from garments, textiles, gold, and souvenirs to electric goods and local delicacies. Visitors can see the town at its best during major festivals like Chinese New Year. 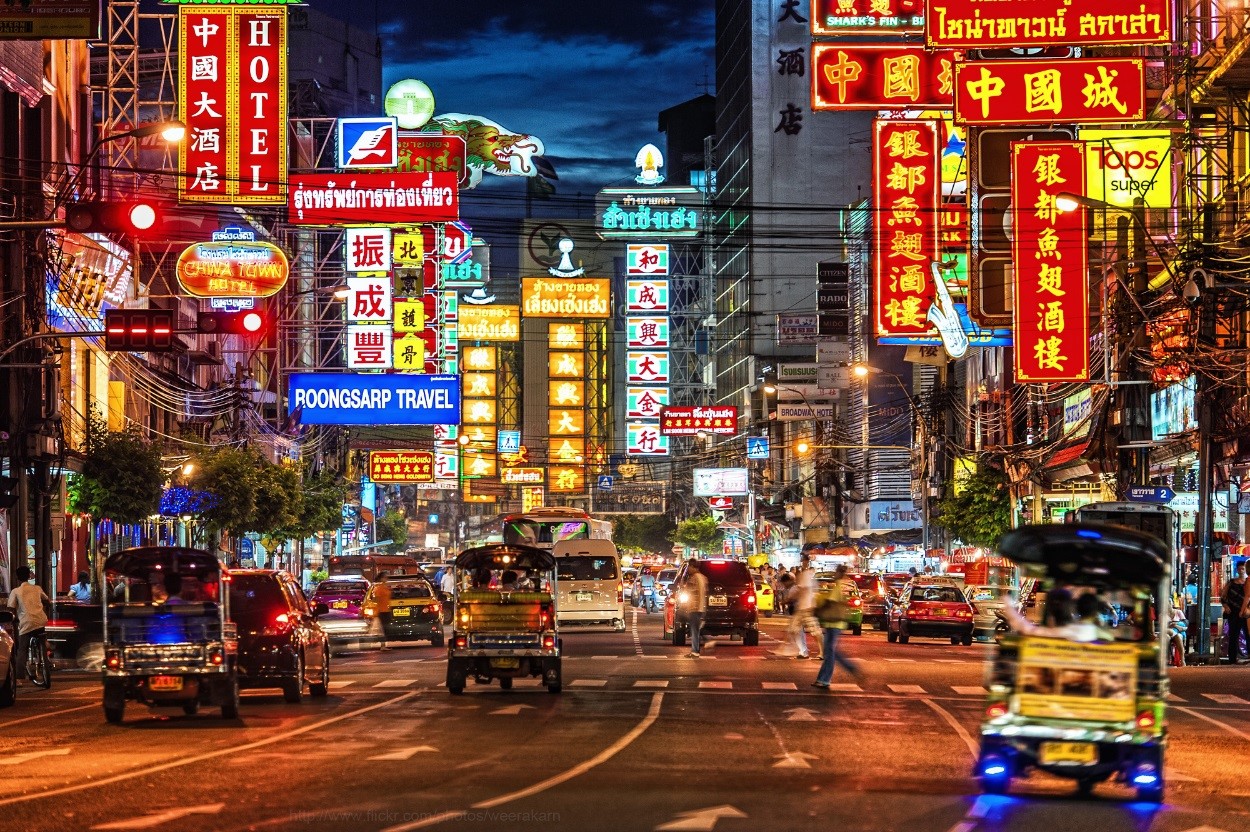 There are many floating markets located around Bangkok and the surrounding provinces. They are extremely popular attractions on the weekends for both locals and foreigners alike. These markets offer tourists a whole new shopping experience on the water. Stuffs like fruits, flowers and souvenirs are sold from thin wooden sampans rowed by local people in bamboo hats. Perhaps the most attractive feature of floating markets in Thailand is the food that cooked and served directly on the boat. Some popular markets around the city are Amphawa, Taling Chan, Bang Ku Wiang Market, Tha Kha, and Damnoen Saduak, Khlong Lat Mayom, Kwan Riam, and Bang Nam Phueng.

Flow through Bangkok, Chao Phraya River’s history is closely linked with the city. Through ups and downs, it is respected and known as “The River of Reign”. A boat trip on the river is a great way to see Bangkok. It is the mix of calm and chaotic, modern and traditional, religious and secular, ugly and sublime, foreign and indigenous that makes the Chao Phraya so evocative.

The Chatuchak is the largest market in Thailand. It has been operated for more than 60 years since 1942 with 27 sections divided into 8000 stalls selling many kinds of goods and merchandises  such as plants, antiques, pets, food and drinks, ceramics, furniture, clothing, and books. The market also features a distinctive clock tower. 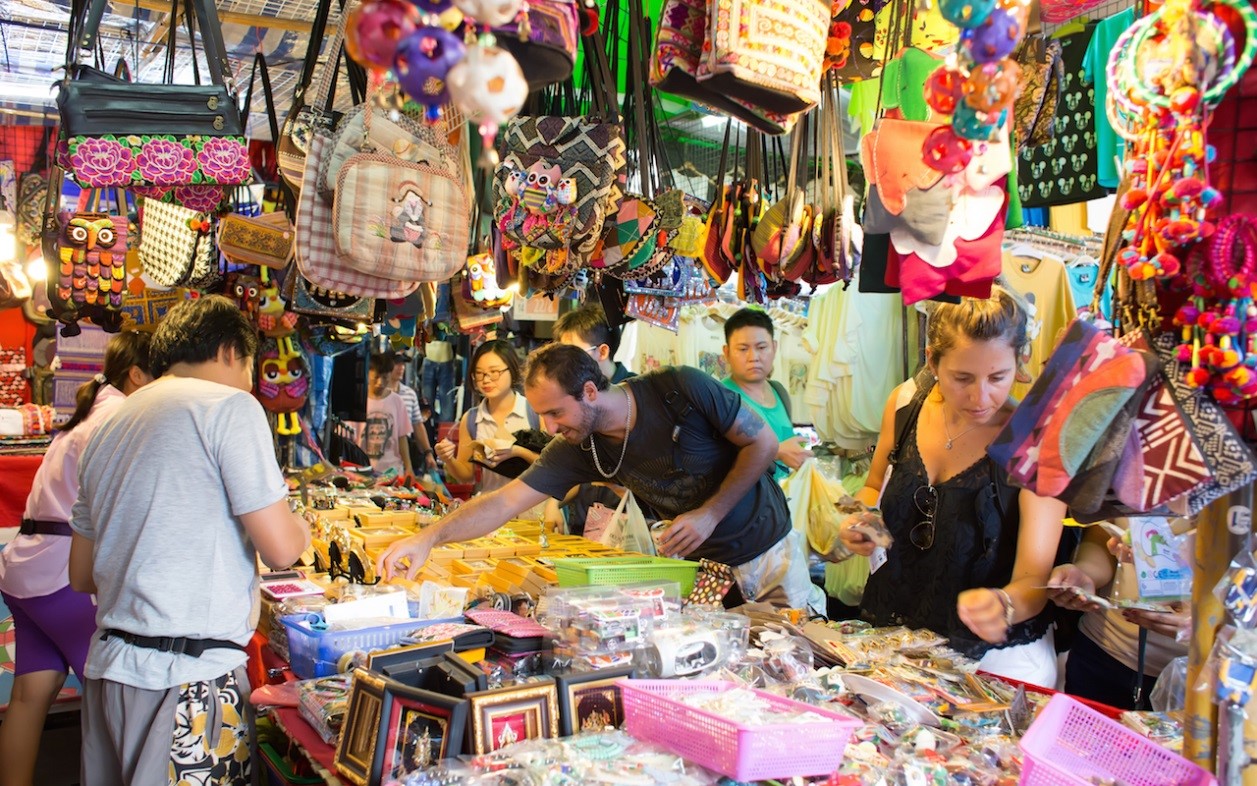 The Jim Thompson House is the home of James H.W. Thompson, the American businessman who has a great contribution in introducing the Thai silk industry to the world. The site is a complex of six traditional Thai-style houses located amid lovely shading gardens. Come here, visitors will have chance to enjoy a tasteful collection of art and antiques. The house is located at 6 Soi Kasemsan 2, Rama 1 Road, Pathumwan.

Bangkok is called the street food capital of the world. Throughout the city, visitors will find cheap and tasty dishes on the streets. And these flavors and fragrances seem to never end. Some places are just food stalls that move around on trolleys while others serve dishes on small plastic tables and chairs on pavement.

The Chinatown is a prime foodie destination in Thailand. Along the road, street stalls and restaurants serve up a mix of Thai and Chinese dishes. Walking around, visitors will find all kinds of Thai cuisines like satay, pad Thai, barbecued seafood, noodle and soups, duck and curries. While most of dishes are available all day, night is the best time to go, not only for the food but the lively atmosphere as well.

Bangkok’s Old Town – also known as Banglamphu, after the lamphu trees that once lined the area’s many canals – is a treasure trove of old-style Thai street food specialties that are hard to find elsewhere. Here, the most famous vendors have been around for decades, nourished by several generations’ of culinary know-how.

Simply express your tour needs, we'll customize a trip plan for you. No deposit is required
until you are totally satisfied with the trip plan.
Free call +84 - 24 - 3835 4899
Create your trip now
Privacy Policy | © 2015 365Travel.asia. All rights reserved
Member of