Founded as Dagon in the 11th century by the Mon who dominated the region, Yangon was originally a small fishing village and later in 1755 conquered by King Alaungpaya who renamed it Yangon, meaning “End of Strife”. Under the British colonization rule in the 19th century, it was the colonial capital dubbed as “the garden city of the East” with spacious parks and lakes mixed with modern and traditional wooden architectures.  After Burma's independence in 1948, the city became the country’s capital until 2005 when Naypyidaw was declared as the new capital. Despite of that, Yangon remains the country's largest city with a population of nearly six million, and the most important cultural and commercial center. Most visitors usually include Yangon as the first and foremost destination in their Myanmar itinerary.

The beauty of Yangon not only comes from its impressive scenery of stunning lakes, green parks and tropical trees along two roadsides but also  a compelling diversity of cultures, people and religions. A mix of colonial architectures, modern high-rises and gilded Buddhist pagodas define its skyline. Yangon is also the most ethnically diverse city in the country.

Yangon has a tropical climate with a rainy season from May to October and a dry season fills the rest of the year. Dry season can be split into two periods: a cooler period and a prolonged hot one. Temperature with average highs ranging from 29 to 36 °C and average lows from 18 to 25 °C. Best time to visit Yangon is the city’s winter (from November to February) which falls in the first period of the dry season. The weather during this time is 19-33 °C, much more comfortable and drier than any time of the year.

Yangon International Airport (also known as Mingladon), 19km north of the city center, is the main gateway for both domestic and international flights. Direct flights to other Asian cities such as Dhaka, Kolkata, Hanoi, Ho Chi Minh City, Hong Kong, Tokyo, Beijing, Seoul, Guangzhou, Taipei, Bangkok, Kuala Lumpur, Kunming and Singapore. Whilst domestic airlines offer routes to about 20 locations within the country, most are to Bagan, Mandalay, Heho and Ngapali, and Naypyidaw.

The city has a 4,000 km of road network of types. Most buses from other regions terminate at the Aung Mingalar Bus Terminal, a bit out of the city and beyond the airport, on the Pyay Road.

Visible from almost anywhere in Yangon, Shwedagon is the most sacred Buddhist pagoda for the people of Myanmar. The 2,500 year old pagoda, which enshrines strands of Buddha’s hairs and relics of three former Buddha is covered with gold plates with the top tipped with 5,448 diamonds and 2,317 rubies

Four entrance stairways lead to the main terrace which, depending on the time of the day, can be quiet and contemplative or bustling and raucous. If you prefer the former, visit in the afternoon. Otherwise pay your respects when the golden stupa flames crimson and burnt orange in the setting sun.

The Sule Pagoda is located in the heart of Yangon. It is about 2,500 years old and contains a hair relic of the Buddha. The pagoda is shaped like a dome with smaller stupas, bronze bells and Buddha images surrounding. Local legend states that the site for the Shwedagon Pagoda was asked to be revealed from an old nat who resided at the place where Sule Pagoda now stands. The pagoda has served as the focal point of both Yangon and Burmese politics, the most prominent being the 1988 uprisings and 2007 Saffron Revolution.

A local market located in the central Yangon, Bogyoke, sometimes called by Scott its old British name, Scott Market, is a major tourist attractions in town. Dominated with more than 2000 stalls, you can find everything here from Burmese handicraft to jewelry shops, art galleries to clothes and other souvenirs and local dishes as well. The market opens every day except Monday.

This is a famous pagoda located in the downtown of the city. Botataung was built by the Mon over 2,500 years ago, it is hollow within. The original pagoda was completely destroyed by bomb in the World War II and rebuilt after that. The 40m high golden pagoda is believed to house a sacred hair of Buddha.

Founded in 1952, the five-story museum includes a wide collection of exhibits, works of art and artifacts related to the Burmese history, culture and lifestyle are on display in 14 halls on four storeys. The museum is located on Pyay Road.

Chaukhtatgyi Buddha Temple is famous as it houses one of the most sacred and largest reclining Buddha images in Myanmar, which is 66 meters long and 16 meters high. The pagoda is located on Shwe Gone Dine Road, north of Yangon.

Located in Bahan, it is dedicated to General Aung San, the founder of modern Myanmar. The two-story museum, establishing in 1962, was the residence of the general before his assassination. Today, it houses exhibits on his life story and general memorabilia such as clothing, books, furniture, family photos and car.

About 25km north of Yangon, the cemetery is dedicated to allied soldiers from the British Commonwealth died in battle in Myanmar during the World War II. It contains the graves of more than 6,000 people and memorial pillars with the names of over 27,000 commonwealth soldiers who have no known grave. Taukkyan War Cemetery is one of the most visited and high rated war sites in Asia.

Inya Lake, the largest lake in the city, was created as a reservoir in 1883. The area surrounding the lake is one of the most exclusive areas of the city to live. The 15 ha Inya Lake Park offers many activities for visitors such as swimming, sailing and rowing.

With more than hundred ethnic groups, it can be said that the cuisine of Myanmar is diverse and eclectic. Despite being heavily influenced by those from India, China and Thailand, it still maintains its own identity characterized by extensive use of fish products. The dishes are also different by the regions. The capital of Yangon is a place for snack. The best street food can be found at temporary carts set up by vendors each morning, and the stews and snacks sold throughout the day represent a wide cross-section of different cultures and ethnicities.

Mohinga, considered by many the national dish of Myanmar, is rice noodle in fish soup with sliced tender core of banana stem, boiled egg, fish cake onion, garlic, ginger, and lemongrass. Often serve as breakfast, but it’s available throughout the day at street stalls in Yangon.

Samosa, called samusas in Burmese is an extremely popular snack in Burma. This kind of salad can be found anywhere on the streets in Yangon. The dish includes sliced samosas mixed with green beans, fried shallots, cabbage, and tomatoes. Fresh mint and lime are also added to enhance the flavor.

In Myanmar, tea is used to make Lahpet, a delicious fermented tea leaves salad mixed with fresh tomatoes, shredded cabbage, peanut, sesame and is spiced with garlic oil, chili and garlic. The dish can be eaten as a snack or with rice. 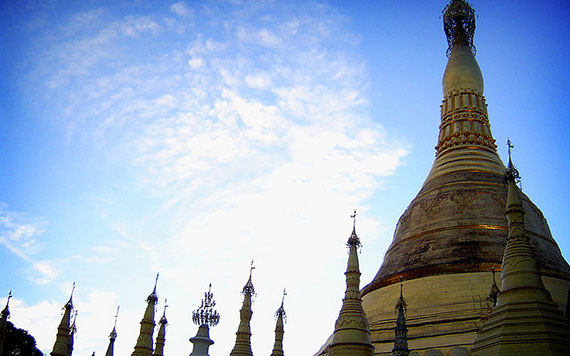 1
Days Yangon – Syriam – Yangon Day Tour
Type: Historical & Cultural | From: $44 pp
Also referred to as Thanlyin, Syriam was once a major port during the 15th... 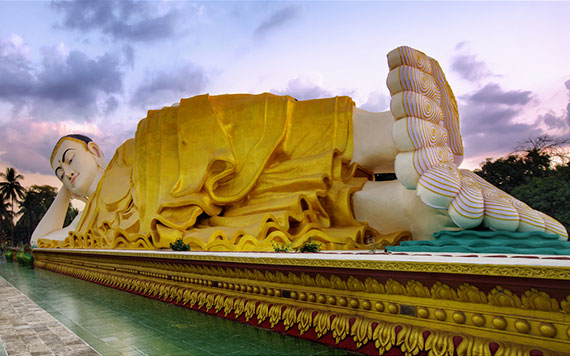 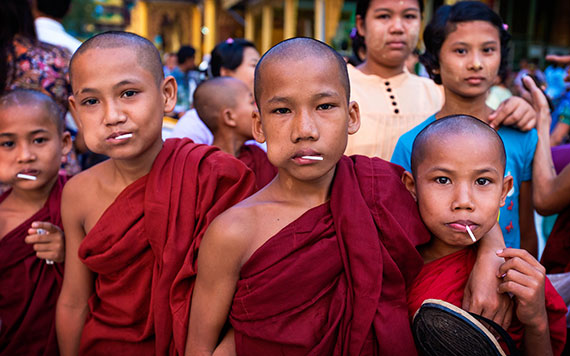